The Historic Festival lived up to its reputation as the largest event on the HRCA Calendar and the tentpole of historic racing on this island. The opportunity to win things like the Irish International Grand Prix, held for the first time in almost 100 years, and the Dublin Grand Prix brought huge numbers of entrants, drew entry levels not seen in four years, and everyone was excited for the off. 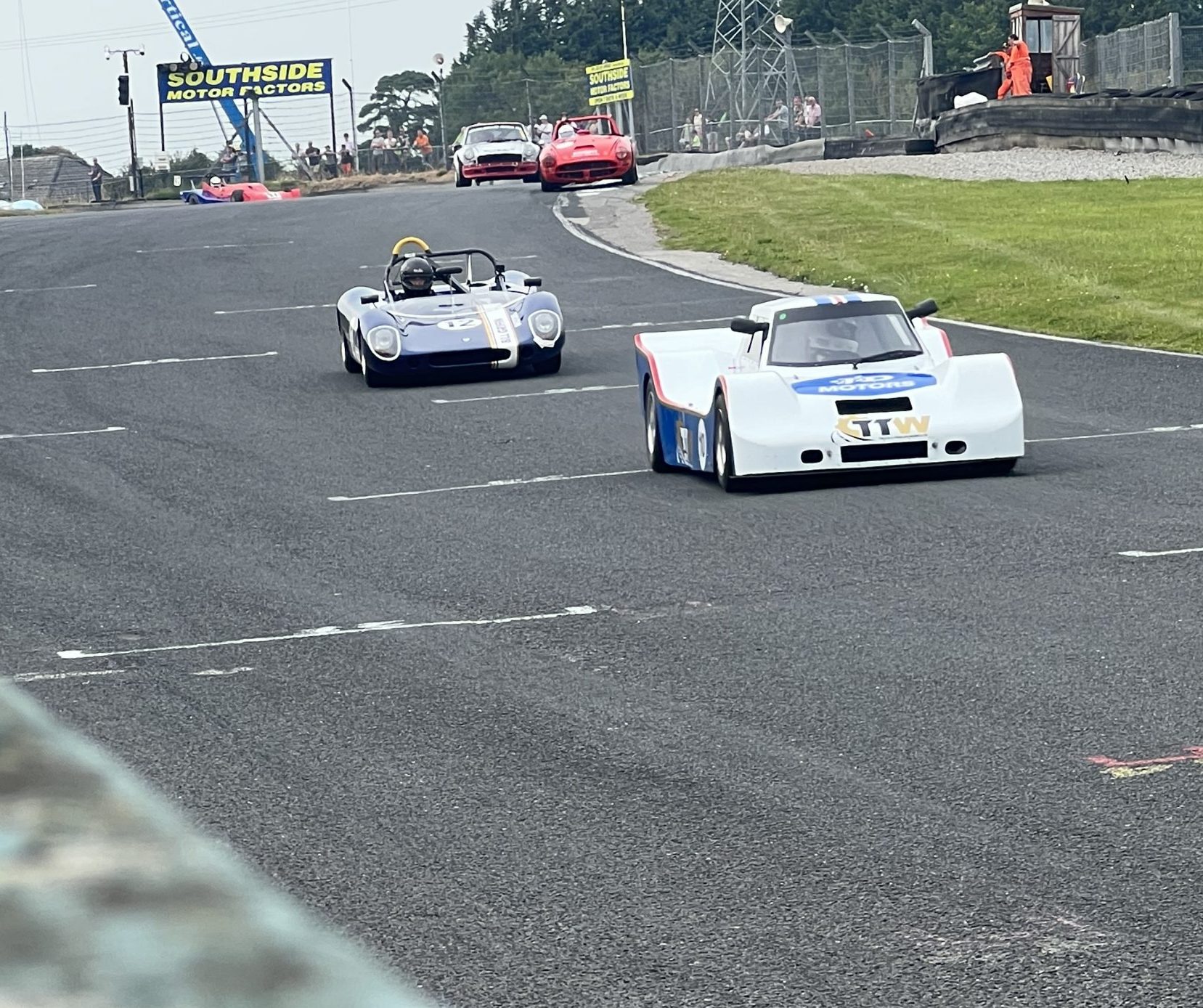 In qualifying, Bernard Foley set the early pace, having the fastest first lap once the grid had come back around to start and complete their first flying laps, however things quickly turned to chaos as David Kelly in his scratch-championship-leading Crossle span out, and then, not moments later, Dave Griffin in the other Crossle suffered a mechanical failure, forcing the session to be red flagged around four minutes to twelve.

The grid quickly filed back and waited for the marshals to recover the stranded Crossles. It was quickly clear that, with neither of them having set fast times, the grid for both races would be mixed up, and there would be good opportunities to set a good grid position.

Tragically, the guest appearance of Colm Hynes was cut short as his car failed coming back out of the international loop, and he was forced to park his Ford Escort Mk.1 outside the entry to turn ten, where he would remain until the end of the session.

However, he was not the only one with issues, as it quickly became clear that the new Volvo of Liam Murphy had some manner of engine malfunction that put oil down on track and, while he would continue to the end of the session, he was forced to spend much of the day before the race with the bonnet pulled up and the tools flying to try and isolate the problem.

This was bad news for Bernard Foley, who started behind him and would find both of his attempts at flying laps after the session restarted frustrated by this obstruction. This allowed Jackie Cochrane to take over the pole position with a positively rapid time of 1:56.74, achieved on his penultimate lap, however all eyes were on P2, where Stephen Doyle had navigated the Lotus Elan normally piloted by Lewis Dunlop to a stunning time that was less than four tenths of a second away from the first position, ahead of the 3.9l MGBV8 of the aforementioned Foley, the MG GT of Colin Murray, and the MGBV8 of Gareth Thompson.

Then came the Mallocks and then came the Fords as if coming off Noah’s Ark, however another surprise was the MG Midget of Conor Cooke who, while comfortably a contender for the fastest in that sub-grouping, was not expecting to manage a P11 start in such a stacked field, particularly having switching to his harder Toyo tyres to save his Avons for the race. The 2:07.63 time is, to hear him tell it, the fastest that car has ever lapped that layout, a testament to the grip that was coming from the intensely hot tarmac. 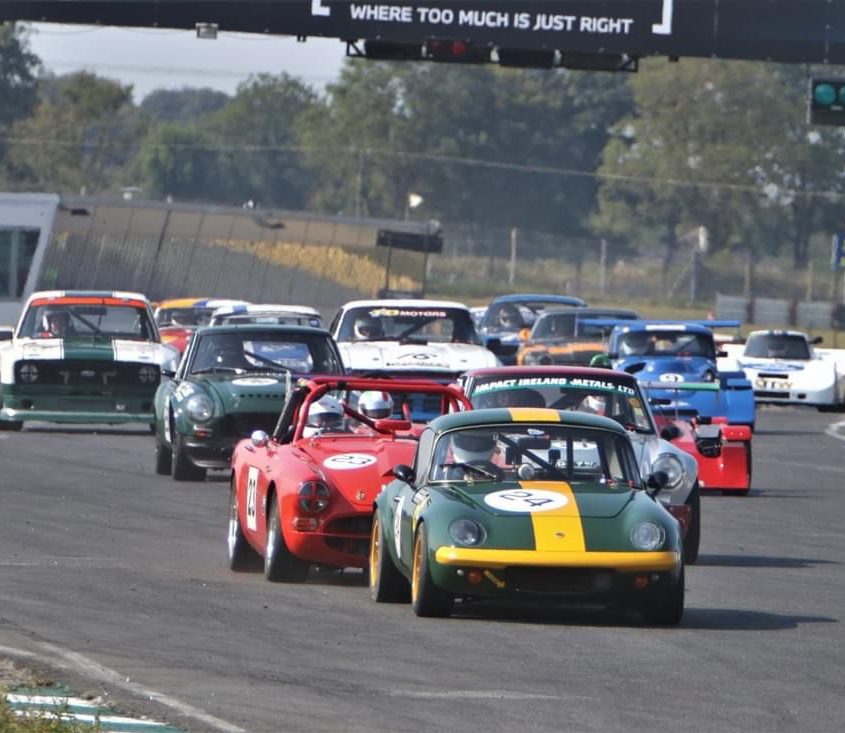 After the session was over, Conor was pleased to be ahead of the TMC Costin of Val Thompson and the MDGT of Seamus Hobbs, and was especially pleased to be as far ahead as he was to his competition for the Joe Flynn Trophy, named after an MG test driver who drove many laps of Mondello, for the fastest MG Midget, with 1.3 seconds in hand over Joe’s son Johnny and 2.1 seconds over Wolfgang Schnittger.

However, he was not immune to the general mechanical maladies that were befalling the grid, as no sooner than he had returned to the infield, he was rushing to repair an oil seal in the back of his engine that was causing a major leak. Fortunately, with the first race taking place at four o’clock, there was no rush to do so. 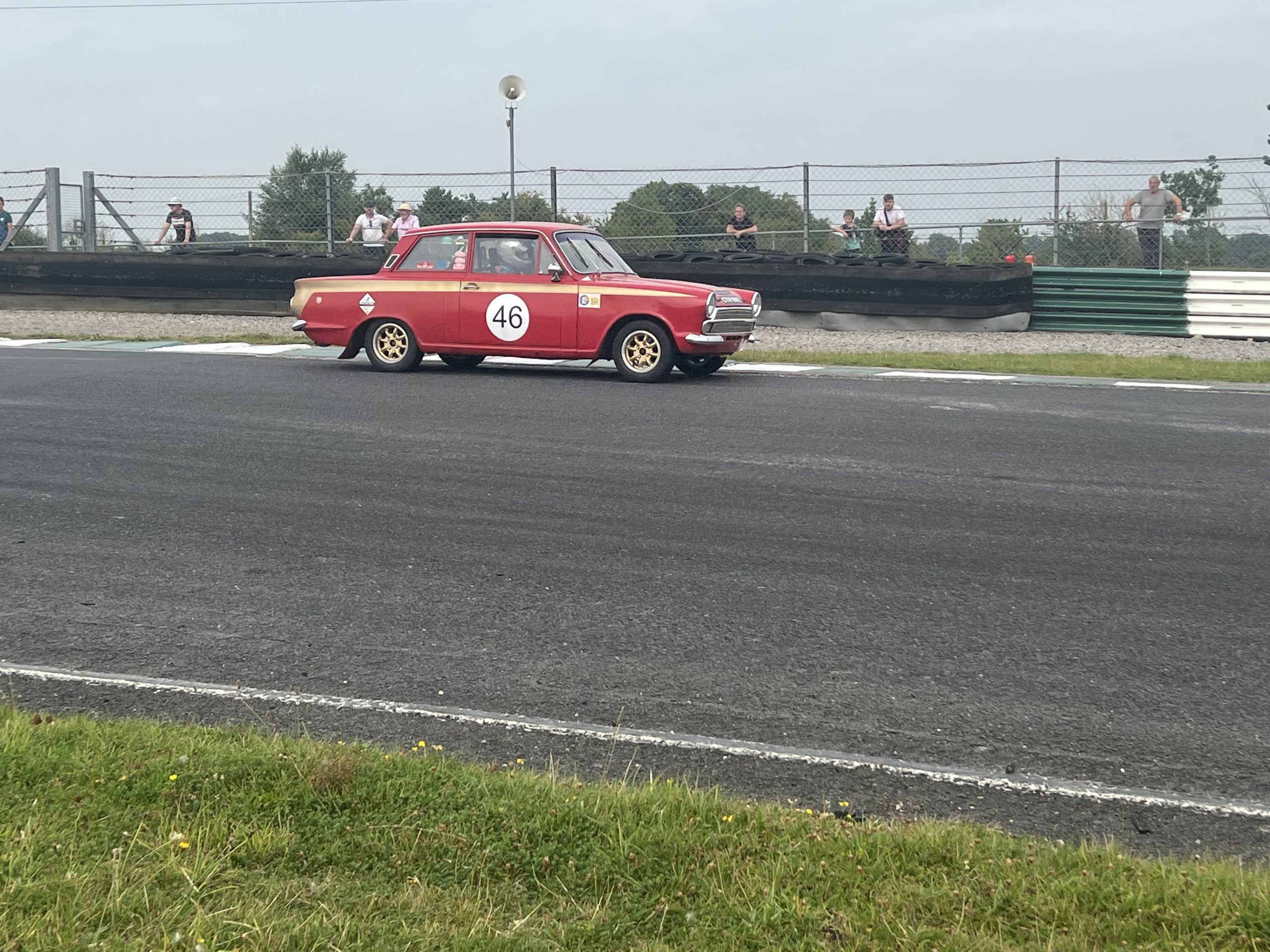 After a long wait for other events, it was finally time for the HRCA to race for the Birrane Trophy, and as the grid lined up, notwithstanding a little confusion over the drummers, everyone knew what was at stake. Cochrane knew he had to make the most of the start, given the rapid getaway of the Elan of Stephen Doyle next to him, however he could do nothing to avoid being pulled away from and then pulled in front of into the first corner. Worse still, this pinch to the inside meant that the outside was open for David Kelly, who had had an electric start from fifth, to hang around and hook through turn one the long way, enabling him to pull alongside on the entry to turn two and blast up the inside.

Stephen Doyle had worked miracles to get the Elan onto the front row, however he was outmatched trying to defend against a Crossle, and conceded the position between turns four and five. Meanwhile, further back, Dave Griffin had made his way through cars like a swimmer through water, cutting through not less than ten cars before even reaching turn four, including one brave overtake of Gareth Thompson up the inside of the double apex turn three. From last, Griffin was in fourth by the end of the first lap.

While Griffin did by that stage have a gap to make up to Kelly, he sternly set to it and hounded Kelly up and down the track, making up time and eventually putting himself in position to slink underneath Kelly through the final corner, setting himself up for a run on the main straight and a dive up the hairpin at the end of it, giving him a lead he would not let go of.

At this stage, the race would be for third position, as Jackie Cochrane in the Tiger held off Bernard Foley in the MGBV8 and, after having fallen back on the first lap, Stephen Doyle in the Lotus Elan. Doyle would close up in the braking zone, but limp behind when they opened the taps. Cochrane would tactically slow the pack down at the apex of the slow corners deliberately to try and avoid allowing the cars behind to carry momentum, however it would backfire as he locked up heavily into turn one and nearly lost the position defending. 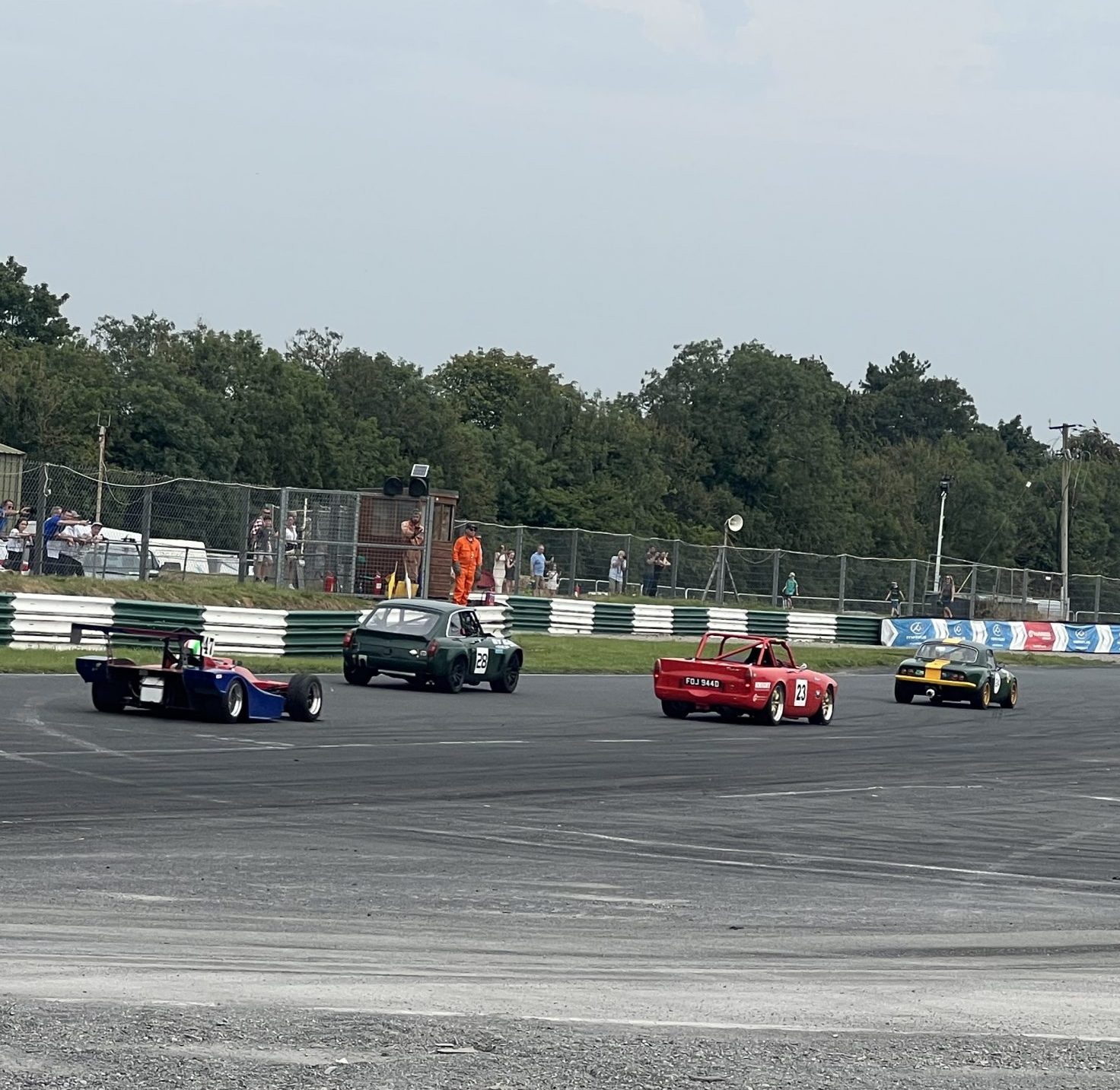 This stalemate would end when Doyle, pushing hard to follow, span on the exit of turn 7B, taking him out of the battle for the podium places, and into the battles of drivers like Tommy Doherty, who was holding off the advances of a buoyed Conor Cooke. He would recover to eighth, while they would finish tenth and eleventh, with Brendan Keane in no-mans-land between them. Noel Collins retired early after his wheel fell off, while Colm Hynes only completed one lap.

However, all eyes were on the third place fight between Cochrane and Foley, which went all the way down to the line, with the two racing side by side at the finish, with Cochrane winning out. From there the day went down, and everyone prepared for Sunday;s festivities. Tents went up, barbeques came out, and everyone settled in for the night. The diabolical heat of the day gave way under a cloudless night for comfortable outdoor sleeping, meaning that everyone was refreshed ahead of the Sunday. A few repairs were needed ahead of the next race, however the next HRCA outing was at 4pm, almost a full 24 hours later. Conor needed to jerry-rig a fix to his alternator, and Noel would need to find a more secure fixant for his wheel. 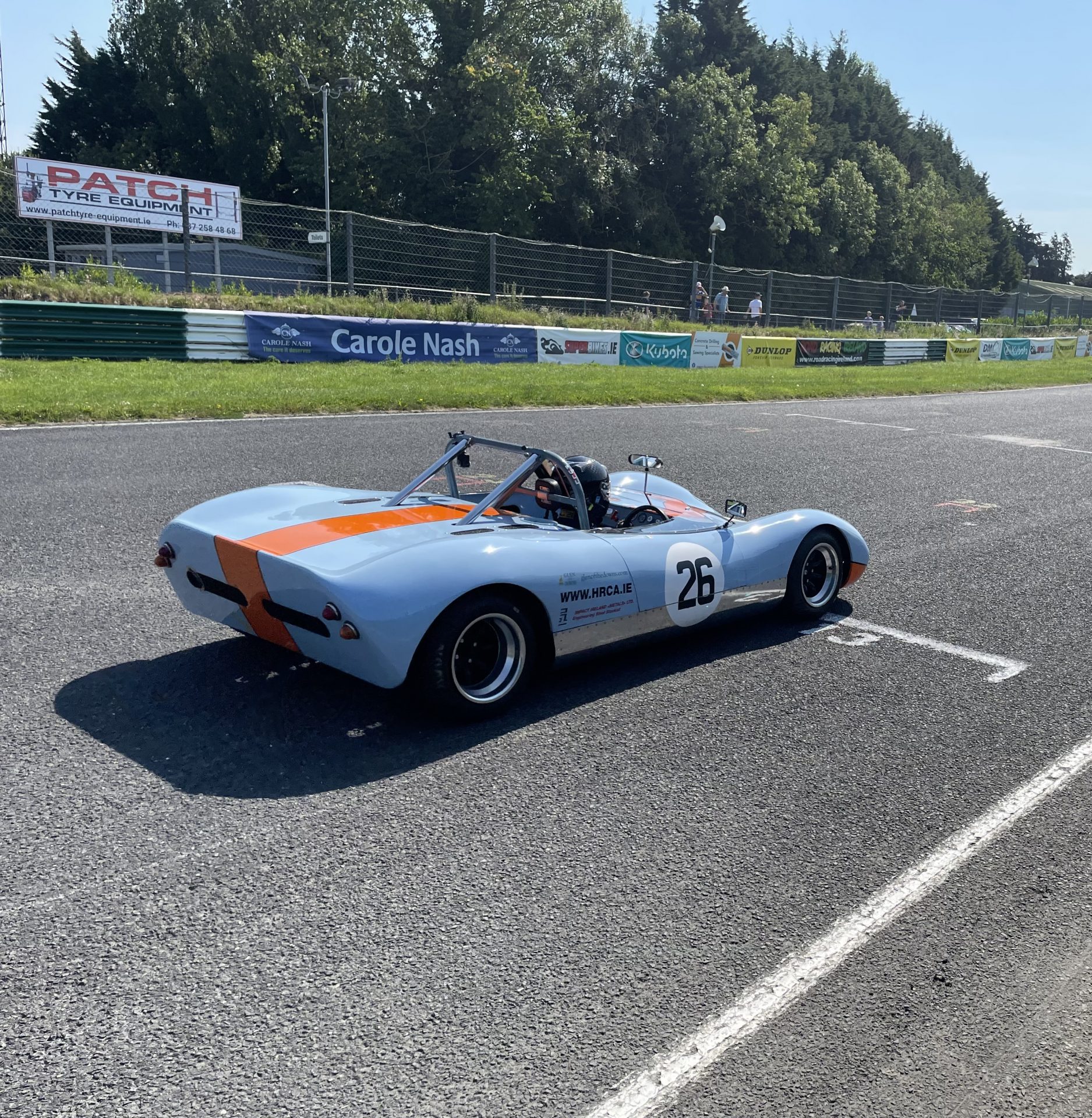 However, all eyes were on the third place fight between Cochrane and Foley, which went all the way down to the line, with the two racing side by side at the finish, with Cochrane winning out. From there the day went down, and everyone prepared for Sunday’s festivities. Tents went up, barbeques came out, and everyone settled in for the night. The diabolical heat of the day gave way under a cloudless night for comfortable outdoor sleeping, meaning that everyone was refreshed ahead of the Sunday.  A few repairs were required in the interim, as Conor needed to jerry-rig a fix to his alternator, and Noel had to find a more secure fixant for his wheel.

After another day of racing, as the next race was not until 4 PM on the Sunday, it was finally time for the final HRCA race of the weekend.

With the grid set from the second fastest laps of Saturday mornings qualifying, the grid was as messed up as it was for the first race, however the electric start did not come from Dave Kelly this time. Rather, it was, after the start was delayed by a stall from Bernard Foley, Conor Cooke who slinked up the outside of Donal Griffin and James O’Mahony to compete with one of his main competitors for the Joe Flynn Trophy, Johnny Flynn, who had gotten a good start of his own to make his way past Brendan Keane’s Mallock, if only for a short time.

Meanwhile, at the front, it was Gareth Thompson in position to take first from a fast-starting Stephen Doyle, with dicing through the field further back, however this would not last long, as a safety car was quickly called out for the retiring MDGT of Seamus Hobbs being stopped on track. In an amusing moment that nearly turned dangerous, Tommy Doherty, who didn’t see the yellow flags, continued to charge through the slowed pack, though he did give back his positions once he became aware of the full course caution.

Fortunately, the safety car was over quickly, and before the third corner Gareth, with a rolling start taking away Doyle’s Lotus’ standing start edge, had gotten ahead of said Lotus and was hoping to stretch a gap to secure more of a lead. Behind them, Cochrane and Foley battled, as Colin Murray in an MG GT laid back in wait. However, Dave Griffin was on the attack, and overtook Colin, only for Colin to use the MGBV8 of Foley as a pick, boxing Griffin in behind the heavier car as he went around the outside of the Crossle in clean air faster than it could trapped behind Foley. 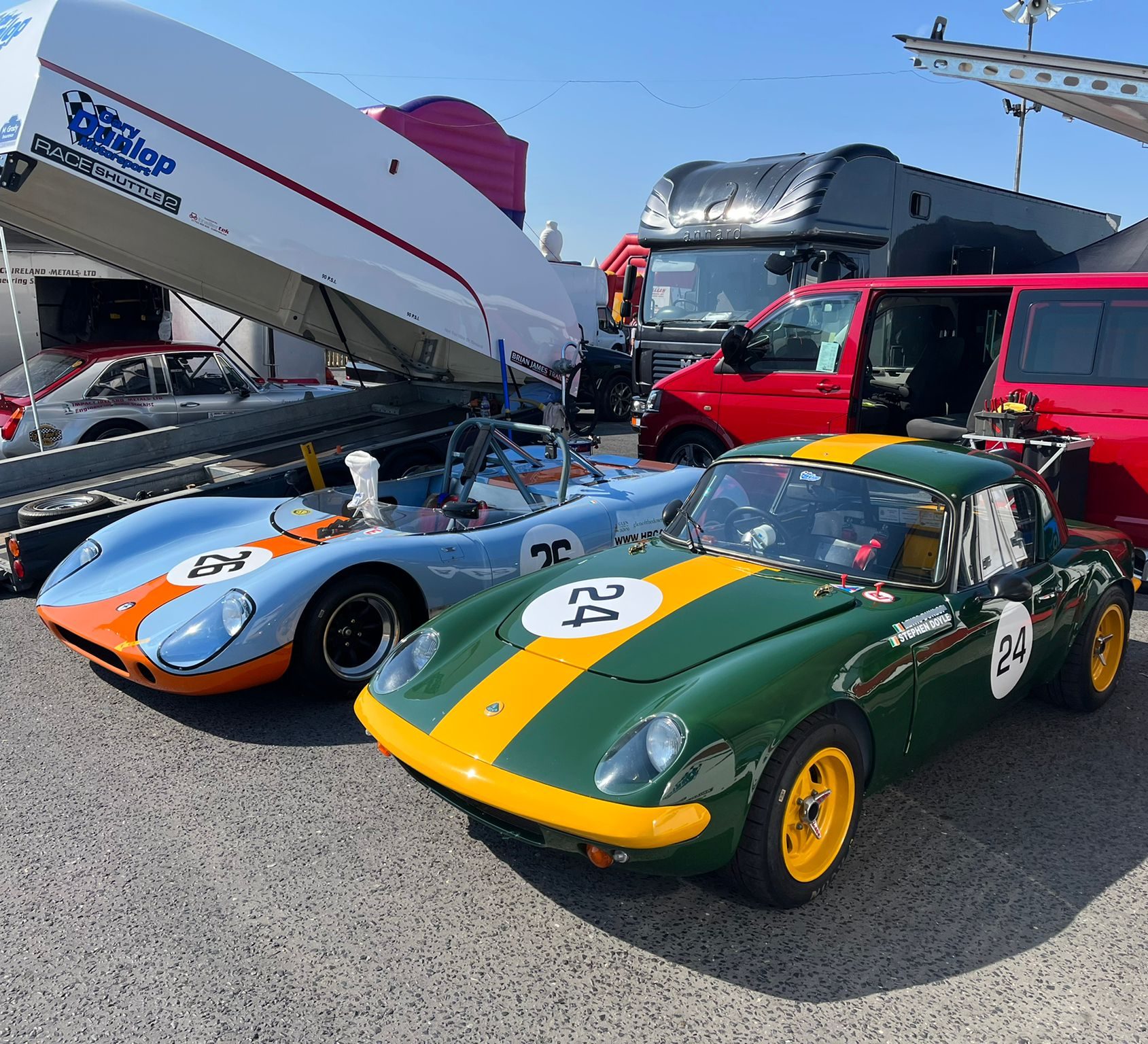 Murray then leveraged this to get ahead of Foley into turn five, and was able to make the most of sharp but legal defensive moves through Daly’s Drift and turn one to keep ahead of the ever-rapid Crossle. It may have seemed like Colin was delaying the inevitable, given how much faster Dave seemed to be, however it was at that point, on the entry to turn three, that Dave span out, taking him out of contention for the win. Now, Colin was free to attack the Stephen Doyle’s Elan and Gareth Thompson’s MG, and he was lapping faster than David Kelly, the only possible other threat. While Griffith would make his way back to second, there was nothing to stop Murray romping away with the win, though Thompson spinning when trying to counterattack into turn three can’t have hurt.

However, there were other dramatic battles afoot. Further back, Conor Cooke had been able to get past Johnny Flynn after the first lap, however issues with his clutch meant that he couldn’t avoid giving up the position into the chicane. After a titanic back and forth, Conor was able to get ahead on the last lap, however he knew his clutch issues would spell trouble out of the final corner on the run up to the line. What followed was an electrifying final stretch, where Johnny was squeezed towards the wall as he closed up in a finish that came down to one thousandth of a second, favouring Conor by less than a foot, after a quarter of an hour of trying to get a definitive edge. Remarkable.